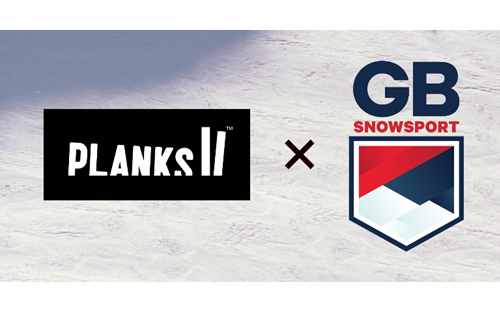 One of the UK’s most iconic snowsport brands will now be worn by some of the country’s best athletes following a partnership between GB Snowsport and winter clothing company, Planks.

As part of the deal, athletes and coaches from a number of the national squads – including Park+Pipe, Ski+Snowboard Cross as well as Para Snowboard and Para Nordic – will have the opportunity to be kitted out in Planks outerwear, with a number of the freestyle athletes also using the jackets in competition.

GB Snowsport CEO Vicky Gosling said the partnership was a natural fit for both organisations and marks the beginning of what is hoped to be an ongoing collaboration.

“The values which saw the creation of Planks are exactly what we embody at GB Snowsport so it’s fantastic that this great British brand has agreed to come with us on our exciting journey,” she said. “They’re not only one of the most fashionable brands in the mountains, they’re also continually adapting their products to ensure their range is functional and meets the needs of the world’s best.

“James ‘Woodsy’ Woods has worked with Planks for many years now and we can’t wait to see even more GB Snowsport athletes in their kit in the 2019/20 season and beyond.”

Starting from nothing but aiming to reach the peak of their industry, Planks was established in the UK in 2008 and over time has developed an international appeal with stores and retailers now distributing their products in Europe, North America and the southern hemisphere. It is a success story which mirrors that of GB Snowsport which has gone from largely modest results in the past to Olympic and Paralympic podiums and World Championship medals.

Planks takes a sustainable approach to its business, utilising the latest recycling technologies to use plastic bottles – which would otherwise end up in the ocean or in landfill – in the fabrics which make up a large proportion of their range.

“We’re incredibly excited by the partnership we’ve developed with GB Snowsport and are really looking forward to being a part of their success on the world stage,” said Planks founder Jim Adlington. “In many ways Planks and GB Snowsport are on a parallel journey: we’ve both started as the small guys, trying to punch above our weight and we’re both now starting to enjoy international success despite Britain not being regarded by most as a snowsport nation.

“We’ve been working with guys like Woodsy and Mike Rowlands for a while now and we’re really looking forward to supporting even more GB athletes from this season and into the future.”

GB Snowsport athletes and officials will start wearing the new apparel during the start of the northern hemisphere World Cup season.